We are delighted to introduce the following talented individuals as Jury for the 2011 edition of the NUHA Blogging Prizes. They announced the winners on 7 December 2011.

Anny Bhan currently works as the Senior Parliamentary Assistant to Claude Moraes MEP, S&D Coordinator for the Committee on Civil Liberties, Justice and Home Affairs. She works on a variety of files in this Committee including immigration policy, asylum and fundamental rights.

Her academic studies have included a Masters in Human Rights from London University and study programmes with the United Nations and the European University Institute.

Prior to working in the European Parliament, she worked with local and international non-governmental organisations in both London and Aberdeen.

Kate Benetti is a Policy Advisor to Peter Skinner MEP for his work on the Economic and Monetary Affairs Committee in the European Parliament. She works primarily on regulatory issues between the EU and the US, insurance regulation and competition policy.

She has a degree in European Political Economy, and a Masters in EU Diplomacy and Foreign Relations. She is the Communications Coordinator for the NUHA Foundation.

Al-Karim Khimji is an International Youth Representative for the Duke of Edinburgh's International Award Association. He recently completed his role as the Head of Strategy for Roshan, Afghanistan’s leading mobile communications operator and a driver of private sector development. He was previously a Canadian International Development Agency-Aga Khan Foundation Microfinance Fellow at the First Microfinance Foundation (FMF) of Egypt.

He holds a MBA from Queen’s University and a Bachelor of Commerce from McGill University.

He attended this year’s Commonwealth Heads of Government Meeting–Youth Forum and the Canadian Governor General’s Leadership Conference in 2008.

David Ziyambi is a solicitor with the law firm Latham & Watkins LLP. Specialised in finance, his practice centres on the energy and mining industries, with a particular focus on Africa. He is also heavily involved in the promotion of legal education in Zimbabwe and the definition there of a development-sensitive investment framework.

His education includes a double degree in English Literature and Linguistics, and in Law at the University of Cambridge. 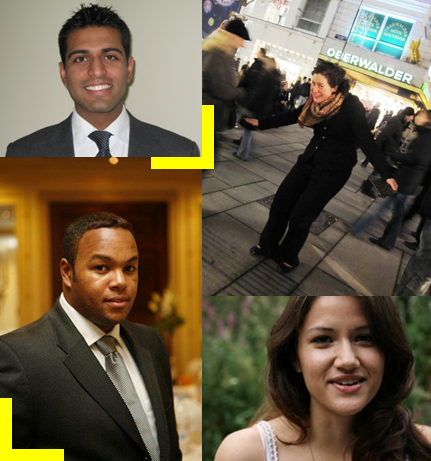