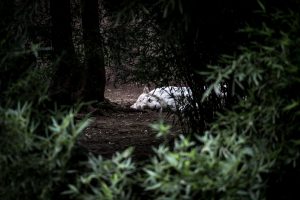 A White Bengal Tiger. (This is Will in the story.)

As Will lay under the sun in his favorite spot, he looked well away into the distance. Will is a White Bengal Tiger, the first son of Maui. Will, the White Bengal Tiger, hid in the forest when the first daughter of Maui, Joshwa, annoyed him badly. She would tease and chase him, even bite and scratch him. He sat here to find peace every time he was made fun of. All I do is lay there, be teased and get made fun of! Will thought and thought.

You see, Will was a nice tiger. And I mean nice. He disliked killing animals, so he depended on his younger sister do it. His parents tried relentlessly to get him to hunt. But he was just too kind.

They would tell him, “If you kill, let’s say, three animals, we’ll give you a whole week to not kill.”

Will stared into the bushes until he was ready to slink back to their camp. At two, he was almost too old to stay with his parents.

Welp, onto living off scraps or actually hunting! He accused himself.

At what point will I live a normal life? He thought.

“Roar!” Maui yelled. “Dinner!” So, Will rushed to his father.

He and the others ate, and no one made noise until little young Joshwa spoke up.

“Ha! Will! You’re two! Ha! You’re two! Ha! Now you’ll have to live off what I get you and that’s gonna be nothing! Ha!” She teased. Will thought, Am I two? Not only am I a white tiger, unlike everybody else but I can’t hunt! I’ll never be normal!

And so Will raced to his spot, hurt by the teasing once again.

“Hey! Will! Come back!” said Maui. Maui followed Will. He was faster than Will, and when Will got there, Maui was right behind him. Will laid in his spot. Maui slunk down right next to him.

“Well… am I almost two?” He squealed the last two words.

“Well… Yes. You were born exactly one year, three hundred and fifty-five days ago. (How does Maui know the number anyway?) So, in ten days, yes.” Maui whispered. “You have had your time with us, and we will always love you, Will. But you must be independent now.” Maui split the last few words apart. “Come back soon. I’ll check in sometimes if you wish.” And with that, Maui raced off.

“Come on, Will! Faster! Faster!” Joshwa spat. Will was running after prey, as Joshwa ‘helped’ him.

“If you would kill it for me, that would help!” Will said.

“Well, if you would finally just do it, that would help!” Joshwa snapped back.

Will was so mad that he ran faster than ever, caught the prey, dropped it in front of her, and said, “There you go!” and ran back to his spot.

A Little Later In Maui’s Den…

“He may or may not have been mad at me…” Joshwa said.

Will sat in his usual spot, this time, with Joshwa in the neighboring den.

“No, Joshwa, you got it all wrong! I won’t go, I’m still part of the family,” He couldn’t finish. He was holding back tears.

“’Now you stop!” Screamed Will, “You’re the one who is mean-” Then Will was stopped as well,

“Now both of you stop! This is Will’s special spot- you don’t hurt one another here. You are family, not enemies.” Maui stepped up. “He’s normal and unique, and he deserves love,” Maui finished.

As Will laid flat on his back, a voice interrupted his slumber.

“Will. Will. Hey Will? You there?” The voice said.

“Well, Will, you… you need to know… you’re.. still in my heart, even though you’re not in my home or family anymore. You are my brother. Even though I teased you, I love you. OK? Now … goodbye.” The female voice whimpered.

The leaves fluttered. Will jumped up. Who was that? “Wait! Bye!”

He knew in his heart it was his sister… and he felt loved.