You are here: NUHA Foundation > Blog > Youth > A Picture Really is Worth a Thousand Words 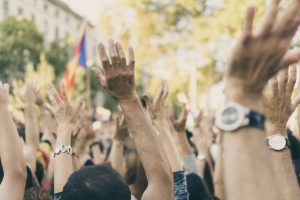 This photo could mean a plethora of things. There are a lot of people together, and they are all raising their arms. That is what is happening in the photo, but it is true when people say that a picture is worth a thousand words: the photo captures just one small frame, of just one small moment, of something that could be huge.

To me, this photo is beautiful.  How can it be beautiful? It is just simply the hands and arms of a crowd of people. The part of it that is beautiful is that these people are doing something, celebrating something together. This photo was obviously taken at a large event where there where hundreds, possibly even thousands of people, all gathered together for something. Could they be celebrating a holiday? Could they be rallying for something at their town hall? Could they be at an outdoor concert, watching a fabulous musician perform? Could they even be protesting against something and speaking up for something they believe in? The purpose of the event does not really matter.  What matters is that whatever it was, it caught the attention of lots of people, all wanting to take part in this one thing.

Hate is a big phenomenon in our world today. Because this is the age of social media, it is much easier for people to spread hate around the world. We are becoming a nation divided by nearly anything and everything: political views, religion, gender, race, sexuality, and more. We live in a day and age where hating on someone or something has never been easier. However, we also live in a day and age where acceptance of different kinds of people has never been higher. People are finally starting to be allowed to be themselves, and that is just amazing. Our society is starting to realize how, regardless of anything listed above, we are all human, no matter what. I would like to think that this photo encapsulates that.

In such a big crowd, there are bound to be people from all different backgrounds who have put aside any differences and come together in this moment. In a world so full of hate and sadness, there are moments like this that make me believe in the future of humanity.  The arms in the crowd are of people both young and old, and I think that signifies something happy. This could have been one of the happiest days of someone’s life, and we get to see that.  It was good enough for someone to want to capture the moment forever, and now we get to see it through their eyes. We get to see the joy that they felt that day, surrounded by others that were all there for the same thing.

Overall, this photo could honestly be of anything. There are endless events and celebrations that could have been what this photo was, but what matters is the people. These people all gathered together on this particular day to make this photo what it was. I can picture a crowd cheering, or even singing. Whatever they were doing, I believe it was something that took them out aside any hatred they may have and made them truly happy, and that makes me happy.